‘There will no second chance!’ Bulgaria and the green transition agenda debated at AUBG

On 5 November 2020 the American University in Bulgaria (AUBG) hosted a Zoom debate ‘Turn green and/or stay warm? Addressing climate neutrality and energy poverty in Bulgaria’. Business and energy experts as well as NGO representatives discussed how Bulgaria – one of the poorest EU member states – can move towards climate neutrality and at the same time ensure affordable energy and heating sources to its entire population. 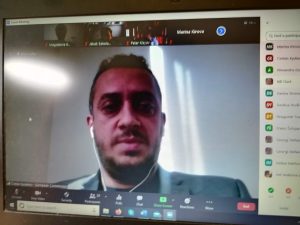 The conference was opened by Mr Cvetan Kyulanov, Head of the European Commission Representation in Sofia. He pointed out that the COVID-19 pandemic and the related economic downturn require paradoxically represents an opportunity to the new generation of Europeans to adopt a new economic growth model. In this regard it was crucial that the post-pandemic recovery plans integrated environmental and economic goals. His colleague Marina Kirova, Policy Officer at the European Commission Sofia Representation provided more details regarding such transformation by discussing two energy-related financial instruments accompanying EU’s European Green Deal agenda. The first one, Renovation Wage for Europe, is a support scheme aimed at doubling the speed of efficiency-enhancing building renovation in Europe, while the Next Generation EU is a recovery instrument for all EU member states providing funds for investments in ‘green, resilient and digital economy’ in the post-pandemic Europe. Ms Kirova highlighted that at least 30 per cent of the Next Generation EU spending needs to be directed towards climate-supporting measures and technologies. All in all, then, there is room for substantial investment in environmentally-friendly technologies, which gives a chance for poorer countries such as Bulgaria to catch up and participate in the continent’s green transition. 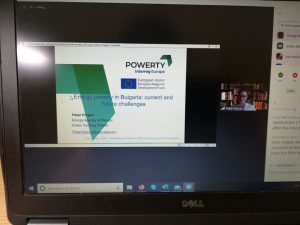 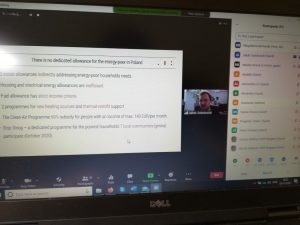 The two remaining presentations in the first panel focused on energy poverty-related challenges in Bulgaria and Poland – two ‘new’ EU member states recording serious air quality problems and high rates of energy poverty. Mr Petar Kisyov, Project Manager at thee Energy Agency of Plovdiv, presented data on the extent of the latter problem in Bulgaria. He illustrated the extent of energy poverty in Bulgaria relying on three sets of indicators: 1) the proportion of the Bulgarian citizens declaring that they are unable to keep their house warm; 2) the proportion of the Bulgaria population receiving heating subsidies; and 3) the number of so-called vulnerable consumers, as defined by the EU Electricity Directive. He also suggested several policies that could eliminate, or at least diminish the extent of energy poverty in the Balkan country. In addition to increasing energy efficiency of buildings and heating systems, Mr Kisyov called for ‘energy democracy’ – or the establishment of energy-producing  cooperatives, which would enable consumers to share the costs of building a large PV plant and subsequently distribute the energy produced by it among themselves. Mr Jakub Sokolowski, Economist at the Warsaw-based Institute for Structural Research presented the results of his research on energy poverty hotspots in Poland’s most contaminated mining regions. He accordingly called for social support to vulnerable communities in the form of social housing and public investment in energy-efficient solutions and renovations, which would also boost the economy in the post-pandemic period. 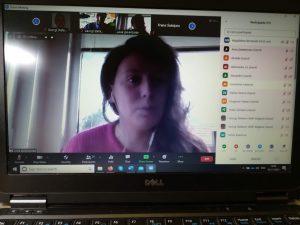 In the second panel, several business, NGO and academic experts shared their views on Bulgaria’s prospects for green transformation and presented their recommendations in this regard. Mr Georgi Stefanov, Senior Climate and Energy Project Officer at WWF Bulgaria and the Coordinator of the NGO platform Climate Coalition BG deplored the government’s reluctance to embrace the greening agenda, and added that there would be no other developmental opportunity as this one for the country. Mr Tzanev, Executive Director of EnEffect Center for Energy Efficiency NGO similarly argued that business actors and several progressive Bulgarian municipalities were ready to move towards the energy neutrality goal and more energy-efficient solutions; it would therefore be a good idea to decentralize the energy transformation process. The idea of decentralization was also supported by Ms Ana Dimitrova, Head of Department of Energy Policy, Environment and Innovation at EVN Bulgaria, one of the country’s biggest electricity producer and distributor. She also called for a deregulation of the sector that would open up possibilities for more ambitious enviro-friendly investments; the introduction of smart meters in urban areas; and the intensification of dialogue between the governments and the stakeholders. 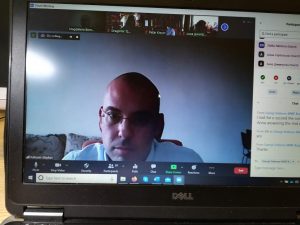 According to the experts, several challenges still lie ahead. Mr Staykov, Senior Economist at the Institute for Market Economics, warned that the transition period, during which old coal-based power plants would be progressively phased out and facilities based on renewable energy sources would still be expensive to operate, needs to be planned and managed very carefully so that to prevent negative reactions to greening on the part of the consumers. Against this background Mr Stefanov remarked that one solution would be to raise citizens’ incomes so that they could cover up for the initial hike in green energy prices; Mr Kisyov, on his part, argued that new technologies soon will become cheaper over time, as it was the case with PV panels. Last, but not least, Mr Tzanev supported the introduction of an educational aspect to currently run energy efficiency programs and building renovation programs, e.g. by making them conditional on a training on sustainability and green policies. He also called for direct grants to households covering up to 100 per cent of green investment and better coordination between different departments of national and local administration dealing with energy, social and environmental questions.

During the Q&A session the audience asked inter alia whether green transformation and energy poverty dilemmas should be tackled simultaneously or one after the other. The majority of experts were in favour of the simultaneous approach. On a question regarding possible pro-climate actions that students can undertake, the experts advised young people to inquire about and understand the environmental implications of our actions; be active in civic associations and support the activities of organizations that advocate environmentally-friendly solutions; and… vote green.

Pdf presentations delivered during the first panel are attached below:

Bulgaria and the new EU framework on Roma integration: towards inclusive and participative education?

March 24, 2020
« Previous post
Bulgaria and the new EU framework on Roma integration: towards inclusive and participative education?
Next post »
Stay tuned for an online debate on ‘green’ transition and energy poverty on Bulgaria