Sustaining social advocacy in an era of projects 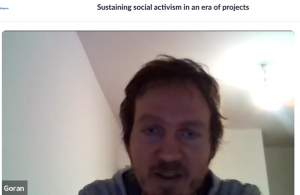 Slovenia is often viewed as an example of successful economic transformation and the most ‘social’ postcommunist country. Beneath the surface, however, it is a country of big contrasts, with groups such as atypical and migrant workers are largely excluded from the benefits of growth and prone to abuse and exploitation.

Migrant Counselling Office was established exactly in response to exploitation of migrant workers from former Yugoslav republics during the financial crisis of the late 2000s. Slovenian trade unions back then were incapable of offering complex and multidimensional support that this group of employees required. As a result, Goran  and like-minded activists launched an organization that provided up-to-date info on workers’ rights and Slovenia’s legal setup in the employment sphere. Parallel to large-scale information-sharing, the activists launched advocacy on behalf of the workers and intervened by contacting their unlawful employers and demanding that overdue wages were paid. Such interventions did not only enable the workers to receive their rightful pay, but they also helped them realize the extent of exploitation that they had been subject to. This realization, in turn, was very important for workers themselves to regain their dignity and feeling of worthiness.

The Office’s activities were initially financed by EU funds, but the EU project that had provided the financial means ended in 2015. The organization was faced with a dilemma: it could either cease – or at least significantly reduce – its activities, or shift towards membership-fees-based financing model. The Office has chosen the latter path, which has proven the choice. At present, it is an NGO with a 2,000-strong membership base that provides the organization with a steady material basis, employing five activists with expert knowledge in the fields of employment law and policy. Rebranded into Workers Counselling Office to highlight its inclusive nature, it is a recognizable actor in Slovenia, present in the media and participating in government consultations on labour-market legislative proposals. At the same time, it has preserved initial approach based on interpersonal contacts and attention to individual workers’ concerns.

Goran’s account was fascinating insofar as it showed that in the era of rigid financial frameworks and project orientation of NGOs’ activities, it is possible to set up and successfully run a membership-based organization. The high quality of support provided to workers and the personal attention they receive, are key to members’ loyalty, which makes the Workers Counselling Office as sustained activity.

Tackling youth employment via the Youth Guarantee Scheme: towards a comprehensive approach?

May 23, 2022
« Previous post
Coal exit and just transition: Is Bulgaria prepared?
Next post »
Support The Unsupported: Social Campaign For a Better Change in Bulgaria for Senior Citizens and Disabled People