In each edition of the Social Policy and Politics course, students prepare social campaigns on causes that they find socially important. It was not different in Spring: we had two teams that addressed pertinent social causes. Below we post the description and the presentation of the campaign prepared by Maria, Erica and Sviatoslav, which advocates broad access to high-quality sexual education in all EU Member States. 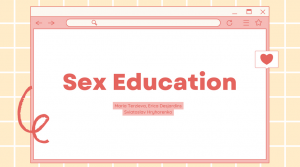 The EU declares that each Member State holds the responsibility of providing sexual and reproductive education to young people. Although nearly every Member State declares sexuality education as mandatory, the quality and content greatly vary throughout the EU which results in major inconsistencies regarding this topic. Sexuality education is not mandatory in Bulgaria, Cyprus, Italy, Lithuania, Poland, and Romania. Additionally, it has been observed that Nordic and Benelux countries are known for more comprehensive sexual education, whereas Eastern and Southern Europe have insufficient or nonexistent sex education.

The present issue to improve is the lack or insufficient extent of concrete, high quality, and consistent sexual and reproductive health education among young people. Sexual education can include a wide range of topics, as well as provide better understandings of one’s health, combat gender biases, combat health risks, reduce involuntary pregnancies, deter sexual abuse, and much more.

We suggest the three following policies on how to provide better sexuality education. Firstly, sex education should become a standalone class provided by the different education systems of the EU member states. This way teacher training on how to approach the sensitive subject and curriculum adjustments by the national ministries will be expected. Making the campaign official on a national level would also give the right to different monitoring organs to require information about the quality and contents of the classes. Secondly, school and public libraries should be urged to provide up-to-date books on sex education so everyone can have access to them. Thirdly, peer educator programs would also be prudent to cover even more young adults who distrust authorities.

This campaign would target kids aged 10 to 17 in both rural and urban areas. This will also include kids who are homeschooled. The second target audience of the suggested initiative is teachers, school staff, and local opinion leaders: people who could potentially answer the questions on the topic and are trusted by both kids and their parents. The third one is parents. The main distribution channels for the campaign would be social media pages as well as on-site school and library posters. With the idea of normalizing the topic and its discussion, opinion leaders would also contribute with their exposure to the publicity of our campaign. The “Sex education is our right” campaign will constitute an additional source of information for kids to rely on. It will also enable a two-way communication channel between kids and educators with an opportunity of remaining anonymous (an important factor for many children throughout a sensitive-topic education). The social media page will have posts about human anatomy, sex education, contraception, etc. The information will be provided in a simple easy-to-read manner. There will be video materials for a better learning experience. Our campaign will focus on educating children on the topic to assure safe sexual experiences, lower the level of unexpected pregnancies, and lower the number of sexual assaults. Rather than convincing pupils that abstinence is the way of protecting and avoiding the dangers of STIs and pregnancy, they will be taught sex education and healthy practices of intimate interaction.

In recent years, young adults around Europe have been demanding that they have access to quality sex education in order to have a better understanding and freedom with their bodies. We as part of that community as well as representatives of the non-governmental sector would like to second that notion and thus, urge the acceptance of our campaign. We understand there could be many challenges such as the unification of agendas on the topic, public opinion, and abuse of the program to further harmful stereotypes, but we are motivated and hopeful. Sex education is a right and should be regarded as such by the whole of Europe.

The campaign’s presentation can be seen under the following link: