Covid 19 has taken a hard toll on employment and made it even more difficult for young Europeans to enter the labour market. Following our discussions on the EU’s Youth Guarantee scheme and its post-2020 successor, Youth Employment Support, students in the Social Policy and Politics course came up with highly innovative initiatives supporting labour market inclusion of Europe’s young citizens.

One of the schemes, elaborated by Donald, was a response to the Greek government’s plans to digitalize the country’s public administration by 2023. He suggested that parallel to the reform, young people aged 15-25 are trained in ICT skills in several areas, such as IT services, Business Software, Telecommunication Services, and IT Consulting.

The courses, offered at three different levels of difficulty, would prepare young Greeks to take up career in the digitalized branches of public administration. In addition, the inclusion of IT companies in the training scheme would also make it possible for young people (especially those completing the most advanced level of the training) to establish contact with potential employers from the private sector.

Under Your Nose, or how to (re-)train Croatia’s graduates

Another interesting policy scheme, elaborated by Lara, sought to address two negative socioeconomic trends in Croatia: i) the extremely high unemployment rate among Croatia’s youth (44.8%), and ii) the related high rates of emigration that force the country to source foreign workforce. Instead of importing labour, Lara argued that fixing the country’s apparent skill mismatch would represent a more efficient solution both in short and medium term. She accordingly suggested that the country’s large pool of unemployment youth should be trained and develop skills needed in most sought-after professions in manufacturing, construction, hospitality and education.

All in all, Lara’s innovative solution to the two problems – youth unemployment and outmigration – is based on the simple idea: invest and activate the resources that are out there, right next to you – or Under Your Nose, as the title of the initiative suggests.

The policy scheme proposed by Zdravko addressed the issue of low levels of literacy among young Roma adults in Bulgaria – the problem that affects even those who have formally completed primary and /or secondary education. He suggested a dedicated two-year training program designed to provide extra training in reading and writing in Bulgarian for Roma youth aged 18-30.

As argued by Zdravko, such a dedicated scheme would greatly enhance the participants’ chances for labour market inclusions, especially that as the scheme progressed, it could also incorporate elements of professional training. He advocated regular monitoring of the initiative, and proposed to measure its success rate by means of a final test and periodic surveys among the graduates.

It is hard to tell whether the policy schemes proposed by the students could break the spell of high young unemployment rates in Europe, especially during the pandemic and in its aftermath. What they have in common, however, in the emphasis on training and practice that reflect the needs of local labour markets, and thus minimize skill mismatches that are the root cause of inactivity and migration. 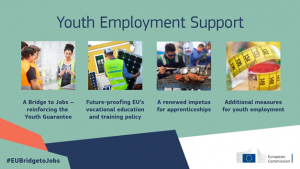 May 23, 2022
« Previous post
Be Trendy, Be Green, Recycle
Next post »
Bulgaria and the new EU framework on Roma integration: towards inclusive and participative education?