Platform-based work: How big is it? And who performs it?

Platform-based work is becoming ever more widespread and attracts growing attention of researchers and policy-makers. Still, there are many unknowns in regard to the actual spread of platform-based activities in the EU and the characteristics of people offering their services via this type of intermediary. To fill this knowledge gap, representative surveys administered by Wouter Zwysen, Agnieszka Piasna and Jan Drahokoupil from the European Trade Union Institute (ETUI) examined the extent of platform-based work in Europe and the profile of ‘platform worker’. In our Social Policy and Politics course we hosted an interactive lecture by Dr. Wouter Zwysen, Senior Researcher from ETUI, who shed light on these under-explored aspects. 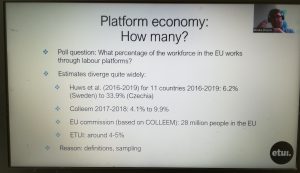 ETUI surveys on platform work have so far taken place three times: in 2018-2019, in Spring 2021 and Fall 2021. To date, they represent an invaluable source of information on platform-based work both due to their high coverage methodological rigor.

Based on the survey data, Dr. Zwysen admitted that platform work was still a relatively rare phenomenon in the EU. Only about 15 million people, or approx. 5 % of the European workforce, have generated income via Internet-based platform. A much higher percentage has been involved with more broadly defined Internet-based work, which involved e.g. buying or selling products on the Internet, which however was not classified as platform work in the ETUI survey.

As for platform workers’ characteristics, they usually were a bit younger than the average working population of a given country, especially among those who sourced most of their income from platform work. Both genders were represented, although it seems that similar patterns of gender segregation characterized platform and offline work: men tended to be overrepresented in transport service-providing platforms, whereas women did the majority of remote clickwork jobs. In west European EU member states migrants (in particular those from non-EU countries) were also overrepresented among platform workers.

Most platform workers considered their platform activity as an additional source of income, but they tended to combined it more frequently with atypical / vulnerable type of offline job than with regular full time employment. The contribution of platform-generated income averaged at 10 %, but for some 10% of workers, especially those working for transport service-providing entities, it constituted 75% of their total income. This indicates that even though platforms are mostly considered as a source of side-income, a ‘pocket money’ addition, for some people they are a primary means of making a living.

In terms of recent trends in platform employment, the Covid-19 pandemic led to a significant increase of platform-based activities; more than 50% of respondents acknowledged starting their platform-based work in 2020 or 2021. At the same time, this period has also witnessed great turnover on platform markets, with many startups, closures and mergers between platform providers. The future will likely see even more platform-based work, which may indicate the need for better regulation of this form of activity, especially if there are indications for control over a platform worker performed by the platform / algorithm. The recent regulatory proposals by the European Commission list a set of characteristics that, if met by a give platform, would indicate their employer status and obliged the entities to offer far-reaching protections to individuals working for them.

Dr. Zwysen’s lecture was not only highly interesting due to its contents. Thanks to an innovative use of Zoom polling, we managed to activity co-shape the talk thanks to student contributions and has some really engaging discussions. This was simply… platform-based lecturing at its best!