In each edition of the Social Policy and Politics course, students prepare social campaigns on causes that they find socially important. It was not different in Spring: we had two teams that addressed pertinent social causes. Below we post the description and the presentation of the campaign prepared by Jinwon, James and Gergana, which seeks to promote foster parenting in Bulgaria. 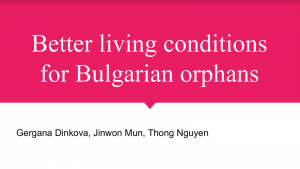 Bulgaria has a significant number of orphans. According to Bulgarian National Statistics Institute (Kandilarov, 2019), children living in poverty are 26.6% and the state has the highest rate in Europe of children separated from their parents because of poverty, physical or mental disability and lack of support.

There are two different types of care for orphans: Orphanage and foster family care. According to the 2007 documentary, “Bulgaria’s Abandoned Children”, there are many orphans with physical or mental issues. The disabled orphans are staying in outdated orphanages, which lack any types of renovations.

The case in Bulgaria

The development of orphanage is a hardly achievable task, having in mind the number of children and lack of teachers and nurses. Still, foster family care is a better alternative for orphans in Bulgaria. Sadly, this practice is not common, and many families prefer not to give it a chance.

Germany, for example, has a well-developed foster care system. When children are left behind, they can meet new foster family and have a chance for a better life. To become foster parents, people need to attend “Fostering School”. They will receive funds from the government; however, they need to have a stable annual income and suitable environment for raising a child. There is no requirement for a legal marriage, but there is one for German language proficiency, one for recognition of the cultural and historical background of the state and the child’s (PflegeKinderBerlin.de, 2022). In Germany, a foster child can live with a foster family permanently, until 18 years old, or for a certain amount of time. Also, whenever a child’s family has a serious issue, the child can stay with foster parents until its biological family resolves their issues.

Bulgarians have no interest in being foster parents. 63% of the Bulgarians would not become foster parents under any circumstances (NFCA, 2021). Because of that, we want to do a campaign for Bulgarians to rethink about being foster parents. This is a noble act of giving a child the opportunity to live a stable life in a healthy environment. It is not a popular opinion among Bulgarian citizens and this campaign’s aim is to spread awareness for this initiative.

We will promote the campaign through social media. These platforms enjoy a huge number of users who can spread the word of this mission and make a positive change not only for orphan children, but for childless families as well.

The campaign is available for feedback from Bulgarian citizens. Through social media platforms they can gain information and ask questions about the initiative, express their opinion and get help in potential fostering decisions.

We will upload the poster which include the image of family and phrase, which can increase the media. The foster includes the information of how many children are separated from their parents, and it has “GET INVOLVED!” to encourage being foster family care. Since we will use image, the good social media distribution channel will be Instagram, Twitter, and Facebook. Because of that, we will use these platforms.

The primary targeted audience is Bulgarian families with stable annual income, warm homes and willingness to be good parents to a little child in need. Orphanages are not a better option, having in mind their poor conditions and lack of proper care for the kids. Each family with the desire of expansion will be provided with the needed information and requirements and will have be quickly assigned a social worker that can help the speedy permission of fostering or adoption (European Social Fund, 2015).

The secondary target of this campaign will be the Bulgarian government. The Bulgarian Ministry of Labor and Social Policy (2022) has a goal of deinstitutionalization of child care in 15 years but it was not successful since many Bulgarians do not want to be foster parents. The campaign may not evoke the public mobilization but it might get people’s reflect on and comment about that policy. The secondary audience, Bulgarian government may get a chance to see the current situation, people’s willingness to take care about children and the reason why they do or do not want to do that.

The success of this campaign will have a great outcome for Bulgarian orphans. The number of abandoned kids will reduce significantly, and Bulgarian families will come to understand that giving a child a chance for better life is not a bad or scary idea, as the majority of people think. The decrease in the number of orphans will potentially lead to decrease in poverty and unemployment among young people and will contribute to a more stable future generation. Also, the government might be able to check people’s reaction toward the foster family care system through the campaign. When they see that, they can find the reason and reform the policy related to the foster family care which can encourage Bulgarian people to be foster parents.

The campaign presentation can be found under the following link:

Sustaining social advocacy in an era of projects

May 18, 2021
« Previous post
Platform-based work: How big is it? And who performs it?
Next post »
Start Safe, Stay Safe – Sex Education Is a Right