Our 2022 European Semester focused on whether Bulgaria is ready to meet its EU-level commitments and move away from coal in a socially sustainable manner. Debate participants – industry stakeholders, NGO representatives and regional actors – assessed the country’s current ‘coal exit’ plans and prospects for green and just transition from the point of view of their organizations.

The event started off with the presentation by Bela Galgoczi, Senior Researcher at the European Trade Union Institute, who provided an EU-wide overview of the ongoing coal exit process. According to Dr. Galgoczi, moving away from coal can in a relatively ‘low hanging fruit’ given that only 185,000 jobs, or 0.15% of the total employment in the EU, are linked to coal extraction and coal-based electricity generation. This is a very limited number in comparison with other economic sectors awaiting ‘green’ revolutions, such as the automotive sector. At the same time, he acknowledged that coal-linked economic activity and jobs are concentrated in ten European regions, which calls for a carefully designed, targeted policy approach. Dr. Galgoczi provided several examples of ‘coal-exit’ practices from across the EU. Portugal, for instance, became coal-free eight years before the planned deadline thanks to large-scale investments in renewable energy sources made by the country’s largest power plant. Germany, on the other hand, established the so-called Coal Commission in the late 2010s that brought together various stakeholders with the aim of devising the country’s coal exit plan. With the budget of nearly 50 billion euro, Germany’s Commission is the largest green-transition initiative launched so far by an individual member state. 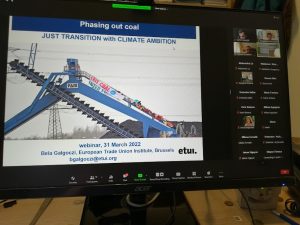 Apostol Dyankov, Senior Climate Expert at WWF Bulgaria confirmed Dr. Galgoczi’s point about the concentrated nature of coal-dependent jobs. He subsequently presented the results of WWF Bulgaria and the Friedrich Ebert Foundation’s study on challenges faced by Stara Zagora, Kyustendil and Pernik – the three Bulgarian regions that are most affected by the green transition. He pointed to the lack of inclusion of regional and local actors in the development and implementation of coal exit plans, at the same time acknowledging the need to raise local administrative capacities, especially at the municipal level. In regard to economic scenarios for coal exit, the WWF expert acknowledged that the mobilization of private financing and mixed-type investments would be needed to diversify economies of the coal-depended regions. In the second part of his talk, Mr. Dyankov presented the results of a survey that WWF conducted among youth in Bulgaria and Western Balkans’ coal regions. In contrast to their older counterparts, young people are hopeful in the green transition of their regions and perceive it more in terms of an opportunity than a threat. At the same time, they were unsure about the extent of EU involvement in the transition process, which suggests that in the future, more publicity should be granted to the European Green Deal and its Just Transition Fund arm.

The debate’s second panel took a form of a roundtable with stakeholders: Dr. Rumyana Grozeva from Stara Zagora’s Regional Development Agency, Mr. Apostol Dyankov from WWF Bulgaria and Ms. Liliya Chobanova representing ContourGlobal/ Maritza East, one of Bulgaria’s largest power plants. In regard to Bulgaria’s coal exit date, Mr Dyankov from WWF Bulgaria claimed that scientific elaborations recommend 2030 as the latest possible deadline to phase out coal extraction and coal-based energy generation. Ms. Chobanova from ContourGlobal Martisa 3, on the other hand, advocated a slightly later date, in view of the relatively high levels of Bulgaria’s dependence on coal and the necessity to ensure the security of energy supply.

The stakeholders also outlined possible scenarios for the green transition in Bulgaria. Ms. Chobanova argue that the coal exit should be gradual, and possibly involve the use of gas as a fossil fuel involving much lower emission levels. Mr. Dyankov, on the other hand, contended that following the Russian invasion on Ukraine it would be difficult to rely on gas as a potential energy source, and thus government and private investors’ efforts should focus exclusively on promoting investment in renewable energy sources. Dr. Grozeva from Stara Zagora’s Regional Development Agency discussed several potential ‘greening’ solutions for her region, such as the use of solar energy and hydrogen production. She also highlighted the need for training and retraining in order to ensure the availability of qualified workforce capable of bring about the transition. Stara Zagora can be considered as a positive example in this respect in view of its rich technical education offer at both university and secondary school levels.

Dr. Galgoczi and Mr. Dyankov’s presentations can be found under the following links: